May’s model favourite is the Athearn Union Pacific 4-8-8-4 “Big Boy”, part of Athearn’s Genesis range. This model has been chosen by MKMRS member Bernard Worden. Bernard, a member of MKMRS since 1989, has always been an adherent of large steam engines, whether the Pacifics on the Royal Scot or more mundane freight locomotives. 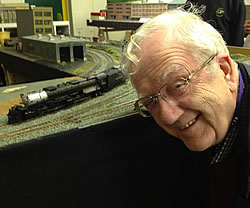 Bernard says: ‘In my early years I watched the nightly coal trains of some 45 mineral wagons being hauled by a WD 9F and assisted at the rear by the ubiquitous 4F on the L&Y and LNW joint railway at Feniscowles; some of the locomotives used to run out of steam on the first bank which made watching all the more interesting.

This locomotive must be the epitome of large steam engines. The Big Boy is an up rated version of the 4-6-6-4 Challenger, designed for a top speed of 60 mph and a capacity to haul a train of 4290 tons over the Wahsatch mountains. These huge engines were however limited to specific routes.’

The name “Big Boy” is reputed to have been made by an apprentice who put the name on a loco at the construction works.