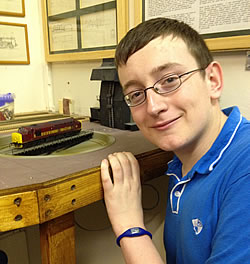 Jamie has chosen this model for several reasons. Primarily, this was Jamie’s first attempt at weathering a model and he has been pleasantly surprised by the results. The images above show the weathering off well and demonstrate what can be achieved, with a little time and effort, to improve an already well-presented model. Jamie finds that the low gearing in the model allows for excellent running and all this is combined with the relatively low price tag for the ViTrains model.