Something European for July’s model favourite; a class 45 2-10-2 engine from the Deutsches Reichsbahn (DR). The model has been chosen by MKMRS Vice-Chairman and Secretary, Chris Hughes. 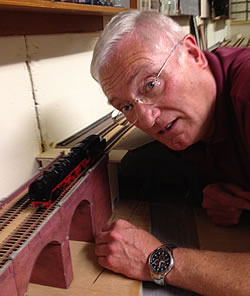 The most powerful locomotive on German Railways, the class 45 2-10-2 was from the former East German Railways (Deutsches Reichsbahn – DR) and ran with a five-axle tender. 2 Prototypes were built by Henschel from 1936 and 26 more delivered in 1940 but wartime activities curtailed an order for a further 103 and no more were built. The Class 45s were given the operating numbers 45 001 – 45 028

One survives but was very badly damaged in the fire at Nuremberg Railway museum in 2005 and has been awaiting cosmetic repair at Meiningen Works, although it is thought this may now have been completed and the loco returned to the museum.

The model is in 1:87 (HO) scale from the Liliput range and is presented in black & red Epoch 3 livery. Chris has just installed a sound module programmed with his ESU software.